I give people props for trying to do their own repairs because I’m a DIYer myself. But it’s important to remember that DIY roof repair is a temporary fix, and we can sometimes get in waaaaay over our heads. 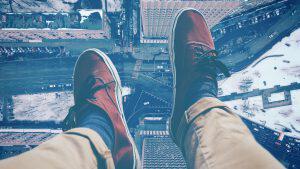 (Did you happen to hear our radio ads last month regarding DIY work? Have you ever made the problem worse? ….uh, me either.)

We recently had a customer in northeast Portland who had a leaking roof. Instead of coming to Roof Life first, he went to Google. His Internet searches led him to a big box store where he bought a bunch of black mastics to coat his roof.

That stuff is great for a temporary fix, but it’s certainly not meant to be permanent. Shingles are designed to evacuate water in a certain path, and as soon as you put something in its way, it’s either going to find another way down the roof or into your home.

This homeowner put a gob of black mastic over his shingles and left it there for over a year. Eventually, his roof sprung another leak, and he gave us a call. Unfortunately, because he waited so long to call us, the repair was almost triple what it would have been if he had called us out initially.

I don’t blame the guy. It was probably pouring rain and he was desperate to stop his leak. But as soon as the rain stops, it’s important to call a professional so we can give your roof a permanent solution.