Recently, I had to stand in a client’s kitchen and tell him that his seven-year-old roof needed to be replaced. The culprit? An architectural shingle on top of a shiplap deck.

The client initially told us he had only one or two leaks in the garage. When I got out there, I took a look in the attic and saw that he had a shiplap deck. Unlike plywood and OSB, which are large pieces, shiplap is made of independent boards.They’re almost like interlocking pieces and there’s a gap in them.

When this house was newer, the gaps were much smaller and tighter. The wood was better. As the house aged, the gaps have gotten bigger and the knots are starting to crack.

If you read the manufacturer’s installation instructions, they say you cannot put an architectural shingle over an old shiplap deck, because it will leak.

And it’s all because this shingle was put over the wrong kind of deck. He installed a good-quality shingle, but it didn’t matter. His other comment was, “Well, my old roof was a three-tab and that thing was up there for twenty years and it never leaked over the shiplap.” That’s because that type of shingle sheds water better. 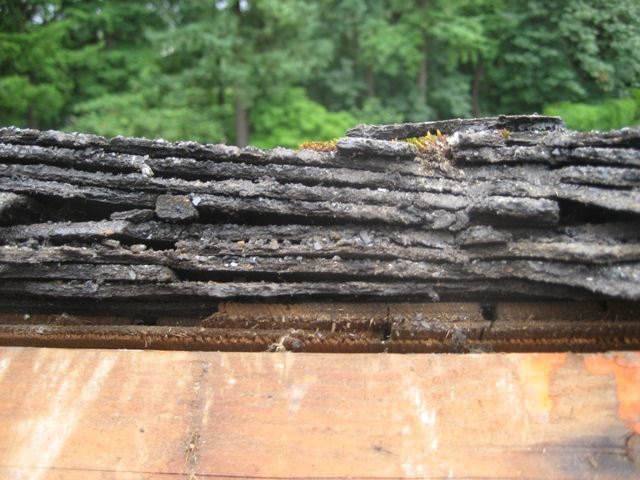 Modern architectural shingles are built differently. Their seams are close together; the water doesn’t just flow off of them. If water gets stuck inside one of those seams, it goes underneath. It then gets to an unstable shiplap deck with big gaps, works on the nails, and you get a leak.

So, unfortunately, this homeowner has a seven-year-old roof that has completely failed. We can’t fix it now, because every repair would just move the leak over a foot or two. It needs to be replaced.

Don’t install an architectural shingle over a shiplap deck. You need to put down plywood or OSB.If you have any questions, reach out to the team at Roof Life of Oregon.