OSHA exists to protect us. It was originally formed to keep us from hurting ourselves and to make sure we go home to our families every night. They constantly update the rules, and recently changed regulations regarding roofers securing off while on a roof.

Regulations used to state that if we worked on anything ten feet off the ground or higher, we had to “harness off” or secure ourselves in some way. They’ve recently changed that to four feet. I know that sounds low, but that’s the new rule.

We see companies in our market breaking that rule all of the time. Just recently we watched roofers not too far from here up on a three-story building for a week, without a harness on one of them.

This can turn into a real insurance nightmare for the homeowner. 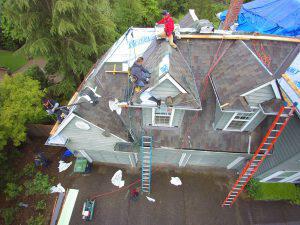 Many builders are putting safety anchors on roofs now, but some still aren’t. When you hire a roofing company, make sure they install a permanent safety anchor on your roof. When we install a brand new roof, we install a safety anchor, no matter the pitch of the roof. Accidents don’t happen on steep, scary roofs. They happen on the low-slope, easy ones because you’re overconfident.

Don’t allow anyone to work on your roof with harnessing off. It’s not just safe, it’s an OSHA standard.